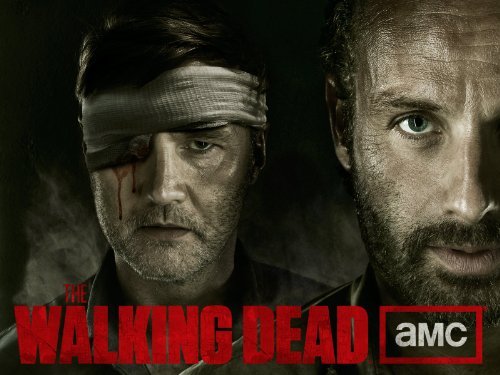 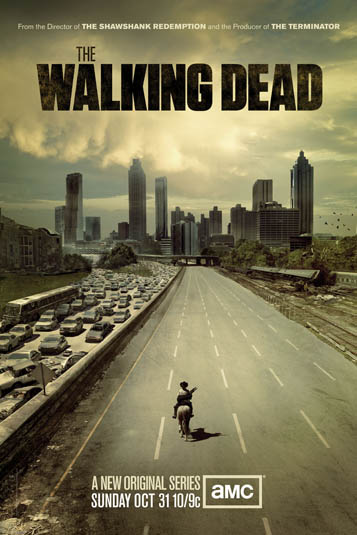 Based on one of the most successful and popular comic books of all time, written by Robert Kirkman, AMC’s The Walking Dead captures the ongoing human drama following a zombie apocalypse. The series follows a group of survivors, led by police officer Rick Grimes, played by Andrew Lincoln (Love Actually, Teachers, Strike Back), who are traveling in search of a safe and secure home. However, instead of the zombies, it is the living who remain that truly become the walking dead. Jon Bernthal (The Pacific, The Ghost Writer) plays Shane Walsh, Rick’s sheriff’s department partner before the apocalypse, and Sarah Wayne Callies (Prison Break), is Rick’s wife, Lori Grimes. – AMC

Season one focuses on Deputy Rick Grimes played so earnestly and believably by Andrew Lincoln who was shot and ends up in a coma for an undetermined amount of time. He wakes up à la 28 Days Later utterly alone in an abandoned hospital, and it to make matters worse, the world is overrun with zombies. Grimes leaves the hospital only to discovers that his wife and son are missing. Rick goes back to police headquarters and arms himself. After hearing a rumor from Morgan (another survivor) and his son that the CDC is said to have set up a quarantined safe-zone in the Atalnta, he starts a journey to the city to search for his family, as he believes they may be hiding there. During his quest, Rick comes upon all the devastation left by the the walking dead and their victims. Upon reaching Atlanta, he soon discovers that the city is overrun and is no longer safe.

A few miles outside Atlanta, Rick’s wife Lori and his son Carl have been hiding away from the walkers with Shane Walsh, Rick’s former colleague and best friend. They have established a camp with a diverse group of survivors from around the country. After being rescued from Atlanta by Glen, who gets Rick out of a tank surrounded by walkers is reunited with Lori and Carl. Rick then assumes a command position with Shane and must take responsibility not only for his family but also for the survival of the entire group. Some of the group members go back into Atlanta to recover weapons, where they come into conflict with some other survivors (The “Vatos”), but Rick soon diplomatically eases all the tension. However, upon their return to their camp, they find it has been nearly overrun by walkers. Hoping to find medical treatment for an injured member, the remainder decide to return to Atlanta and seek aid from the CDC.

Meanwhile back at the CDC, all but one staff member (the sympathetic Dr. Edwin Jenner) have fled or been killed themselves. Dr. Jenner explains his research into the cause of the plague which even involves his late wife as a test subject who has been infected by the infection. But unfortunately the CDC building is not the safe haven the group believed. The next day, during all the hangovers and an attempted rape, the lack of fuel for the generators causes certain safety protocols to be initiated, which will result in the destruction of the CDC. Dr. Jenner explains that the French may have found a cure, as they were the only nation whose scientists stayed in their labs. Dr. Jenner and one of the group members select to stay in the CDC even though the damaged protocols mean an impending explosion. Before the group flees, Dr. Jenner whispers something unknown into Rick’s ear. The group escapes just as Jenner and one other survivor is killed by the building’s self-destruct sequence. It is a gripping and intense ending to the season.

Well paced, shot and acted, The Walking Dead is full of dynamic interplay by cast and crew just like the comics which never cease to amaze. It is an excellent commentary on humanity and how we have the ability to destroy ourselves but at the same time are capable of incredible compassion and self-sacrifice. Don’t miss this incredible drama!

EDITOR’S NOTE: Below is a link to one of our favorite sites, VuReel.com, and all of the currently available episodes.  Normally we’d hook you up with the Hulu or AMC link but for some reason, AMC is not putting episodes up on their site or anywhere else.  VuReel is a nifty little site that will probably be shut down by the studios eventually but until then, you can enjoy a lot of good television shows streaming in flash, with no risk of viruses or your broadband provider threatening you on behalf of the content providers.

The Walking Dead on VuReel.com