…And now for news about a show that sucks and we hate:

In what is not a surprise, THR has confirmed that Brittany Snow and Aml Ameen (two of the four main cast members) have left the David E. Kelley extension of Boston Legal, Harry’s Law, under what is described as “amicable” circumstances.

…producers looked at the stories and roles and decided they weren’t going to be expanded and instead opted to give the duo the opportunity to pursue other projects.

What this means in Hollywood-speak is that in typical David E. Kelley fashion, the stale writing that existed on the show to begin with has gotten even worse, the well has run completely dry and they can’t develop their bland, cookie-cutter, clichéd characters beyond one season nor can they write them into storylines.  We understand how developing characters and writing good stories can be difficult when every show you create is used for nothing more than a soapbox for a political agenda. 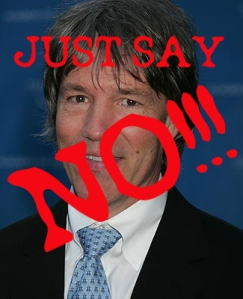 For the record, look at Kelley’s previous shows. They have a history of doing this.  Do you know why? Because like Jerry Bruckheimer, he’s just not that good or creative of a producer and he generally has lazy and uninspired writers.  As noted, we hate this show anyway and we were shocked that it was renewed.  The funny part is that it appears that the only reason that it was renewed was in deference to Kelley over not picking up Wonder Woman.  In other words, they threw Kelley a bone.

A note to NBC and the other networks:  STOP throwing Kelley a bone.  He’s overrated and audiences have grown tired of him (and Bruckheimer is nipping right at his heels in that department as well).  Time to open the door for new blood and ditch these dinosaurs. 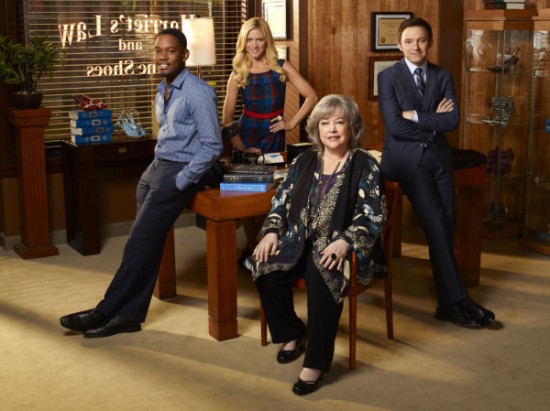 Emmy Award-winning writer/producer David E. Kelley (“Boston Legal,” “The Practice,” “Ally McBeal”) weaves his rich storytelling into a new legal dramedy starring Academy Award winner Kathy Bates in the title role – about how people can embrace the unexpected and other curveballs that life can throw at them.

Harriet “Harry” Korn (Kathy Bates, “Misery,” “About Schmidt”) doesn’t believe things happen for a reason, but she discovers that they sometimes do. A curmudgeonly ex-patent lawyer, Harry is abruptly fired from her blue chip law firm, forcing her to search for a fresh start. She finds it when her world unexpectedly collides, literally, with Malcolm Davies (Aml Ameen, “Kidulthood”), a kind-hearted college student who desperately needs Harry’s help with his pending court case, and he subsequently goes to work for her.

Harry soon finds her balance as well as new offices in an abandoned shoe store just as legal hotshot Adam Branch (Nate Corddry, “The United States of Tara,” “Studio 60 on the Sunset Strip”) accidentally hits her while driving. Inspired by Harry’s no-nonsense understanding of the law, Adam decides to take leave of his shiny corporate firm to go and work with her. Harry, Adam and Malcolm – unlikely but kindred spirits – along with the help of Harry’s shoe-savant assistant, Jenna (Brittany Snow, “Hairspray,” “American Dreams”), are now ready for whatever walks in through the doors of their unique establishment – Harriet’s Law and Fine Shoes. – NBC

Now, you would figure with the cleverly proposed premise and Kathy Bates and David E. Kelley on the marquis, Harry’s Law should be one of the most refreshing new shows of the spring.  I mean, how could they screw this up, right?  The answer is simple and really should have been expected: David E. Kelley.

We really, really wanted to like Harry’s Law and it almost sucked us in… until it morphed into Boston Legal 30 minutes into it.   Please don’t mistake this, it’s not kind-of like Boston Legal because it’s a David E. Kelley show, it’s the exact same frakking show except that this time Kelley figured that it was probably not a good idea to use a TV show as a pulpit for left-wing proselytizing and right-wing bashing when the evangelists are a bunch of uber-wealthy, Boston elitists.

Instead, we now have Harriet Korn (Bates) a well-respected Cincinnati patent attorney who decides that she’s bored of patent-law and goes on a mission of self-discovery that eventually puts her into a crime infested neighborhood that seems awfully clean and in fact it seems a lot like a Universal back lot.  Here she will now practice criminal law (which she has absolutely no experience in) and fight for the poor, downtrodden, misunderstood and those generally abused by the system.

No, what kills this show and why it went from a “7” in our book to a “4” from the first half hour to the second is that it suffers from the exact same problems that Boston Legal did when it ended.  Kelley seems obsessed with preaching to the audience his brand of politics, not understanding that by doing so, he’s alienating at least half of his audience.  Conservatives sure as hell don’t want to hear it and Independents don’t want to hear it either and it’s why Boston Legal only got five seasons whereas its predecessor, The Practice got eight seasons.  We left it halfway through season four and there’s only been one other show that we’ve ever committed to that we left before its series run was over (Heroes).

The Practice, although it definitely had its share of issue-oriented shows, was never preachy.  It didn’t need to be.  The drama was compelling and thought-provoking in and of itself on a weekly basis without the need for anyone to tell the audience how to think politically. What we can’t figure out is what happened with Kelley.  Is it just an issue of hating the Bush Administration so much that he decided that all of his projects would now be propaganda outlets?  We could care less either way what anyone’s personal politics are but when it comes to scripted drama on television, no one wants to be lectured to.  Kelley should know this by now and NBC should have figured it out after the Jimmy Smits legal disaster-of-a-show Outlaw.

The only reason we’re not giving this show lower than a “4” is because there is hope for it and the only thing it needs to be enjoyable is to get rid of the political crap.  The performances are solid and the characters are generally likable.  Will they drop the political crap?  It’s doubtful that they will because Kelley has become an absolute egomaniac with his projects and even if they did dump the politics, it will be too late because we expect audiences to abandon it long before that. We believe Kelley is about to learn a valuable lesson about what you can experiment with and what you can’t when a show hasn’t built an established audience and we expect Harry’s Law to not be renewed for a second season in May for Fall 2011.