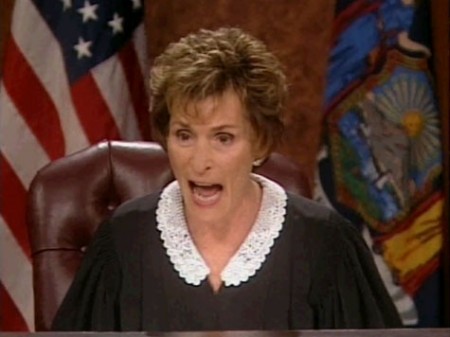 It gives us great pleasure to announce that Oprah’s personal ass-kicker will be back for many more years to come to dish out justice to hillbillies, dirtbags who don’t pay money back to the stupid women that loan it to them, deadbeats who don’t pay child-support, bad credit risks that dumbasses co-sign on car loans for, criminals who don’t pay back bail money because they claim they never asked the lender for it, teenagers who get drunk and wreck someone’s car, roommates that bail on the rent, and every moron who claims that the $5,000.00 loaned to them by a McDonald’s employee who makes $12 per week was a gift.

We love Judge Judy.  It’s so bad that we’ve been scheming with Dad on how to make up a bogus case where he sues us just to get on the show.  Then we realized that she’d see right through our bullsh*t like she does with everyone.  We just want to get yelled at by Judge Judy… is that so wrong?

LOS ANGELES (May 2, 2011) – Judge Judy Sheindlin has signed a new multiyear deal with CBS Television Distribution to continue presiding over her top-rated show, JUDGE JUDY, through 2015, it was announced today by John Nogawski, President of CTD.

“Judy is in a class by herself,” Nogawski said. “For 15 years, she’s delivered one of the highest-rated shows in all of syndication. She’s at the top of her game, and we’re excited to be in business with daytime’s #1 star.”

“I am thrilled with the opportunity to continue this exciting second career,” Judge Judy Sheindlin said. “The confidence and support CBS has shown in our program has been steadfast and very much appreciated.”

JUDGE JUDY, now in its 15th season, averages 10 million viewers, more than any other show in daytime television. For the 2009-2010 season, JUDGE JUDY finished as the #1 rated show in daytime, beating “The Oprah Winfrey Show,” the first time any daytime program had surpassed “Oprah” in a decade when JUDGE JUDY held that distinction as well. Additionally, JUDGE JUDY has been the top-rated half-hour syndicated court show since its debut nearly 15 years ago on Sept. 16, 1996.