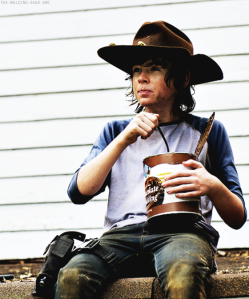 AMC’s The Walking Dead  returned Sunday after a two-month hiatus. As a fan of the series I have sat on the edge of my seat for three and a half seasons now, week-to-week, looking forward to the weekly big twist that was inevitably on the horizon that would make me want to tune in the following week. After the most recent episode, After, which featured hardly any dialogue whatsoever and just a series of awful things happening and horrible, depressing imagery, I’ve come to the only conclusion that I think any rational human being can come to:  The Walking Dead sucks and it has for quite some time.

Now, don’t get me wrong, I’ll probably continue to watch if for no other reason than it’s one of the few shows that Mrs. Tastic and I can agree on so it’s at least mildly compelling and tolerable for me, but I came to the conclusion during the midseason finale that the series is not going anywhere as far as the plot is concerned and I begrudgingly accepted that fact after watching After. It’s simply not progressing the way a serial like this should.

Part of the reason why The Walking Dead became as successful as it did as quickly as it did is because it entered the television landscape at the perfect time when post-apocalyptic sci-fi/horror-themed television was on the rise and it has copied the basic premise (that is, what the show really is about at its core) of all of its predecessors and contemporary counterparts.  Despite what many fans of this show think, the show is not about surviving and it’s not even about zombies.  What the show is really about is exactly what every post-apocalyptic series is about:  How do we maintain our humanity (or if it is even possible to) when the apocalypse hits and the end of the world is at hand?  This is a very common theme on television today even on shows that aren’t technically post-apocalyptic shows.  If you want to examine this further, this theme shows up in popular literature as well, going back decades (think: Lord of the Flies).

So, that’s what the appeal of this genre is at its core.  The problem with The Walking Dead is that though it meets the core requirements of the genre on a weekly basis, there is simply no endgame in sight, in other words, there is no point to this series.  It’s just a weekly festival of stress and gore and the knowledge that any main character could be killed off at any point. This is inherently the problem of basing your serial television series off of a popular comic book serial that has been running consistently for over a decade. Comic books aren’t meant to have an endgame (unless of course they are limited-run), television serials are.  At the end of the day, what is the ultimate goal, the big payoff, the cheese at the end of the maze, the light at the end of the tunnel, etc., for The Walking Dead? Can anyone tell me? 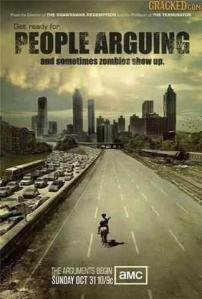 The first season actually gave us a goal: our survivors made it to the CDC and it was hinted at that they were trying to find a cure and if I recall correctly, something about working on a cure in France. Then the CDC blew up, we were all left with this cliffhanger that just made us want more, the series got picked up for a second season and since then it’s just been nothing but a long series arguments, killing the occasional zombie and main characters dying.

As noted, there is plenty of post-apocalyptic television fare currently on television with the same theme as The Walking Dead but they all do it better than The Walking Dead if for no other reason than that we know that eventually there will be a payoff, one way or the other. 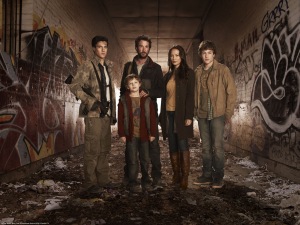 TNT’s Falling Skies which is basically The Walking Dead with aliens instead of zombies but the difference is that the protagonists are taking the fight to the aliens instead of constantly running away from them and just trying to survive.  The endgame is pretty obvious: either the humans will be victorious and defeat the aliens or they won’t.

NBC’s Revolution is a typical contemporary commentary on humanity with the post-apocalyptic theme and for all of its flaws, it is obvious that there is an endgame to this even if they haven’t ultimately spelled it out completely and they throw in mysteries along the way.  Will the power go back on or not?  Will humanity be able to start over?

CBS’s Under the Dome and ABC’s former series Lost aren’t post-apocalyptic, but they share the same commentary on humanity theme that the post-apocalyptic fare does through characters in situations where a small group of people are isolated from the rest of the world and their respective series examine how their humanity remains intact.  Both series have obvious endgames.

The progenitor of the contemporary post-apocalyptic genre television series, Battlestar Galactica (2003) was nothing more than 75 episodes of morality plays and commentary on the human condition… but the endgame was made clear in the first episode. 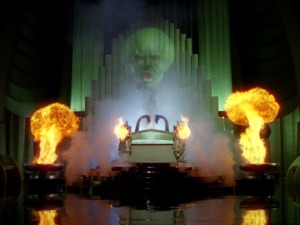 Yes, pay no attention to the man behind the curtain…

So, without an endgame or anything else remotely resembling a goal for our protagonists, what exactly is keeping audiences so enthralled with this series? The answer is simple: smoke and mirrors.

The truth is that this series is surviving based on a purely visceral emotional reaction.  We love to be scared or more specifically we love suspense and when there are characters that we have become emotionally attached to involved in the suspense it makes the experience that much more satisfying.

I’m sorry, but no series can survive on character development alone.  There has to be some substance and not only isn’t there any substance to this series, it’s just becoming more depressing every week.

One of the traps of developing characters as thoroughly as this series has done to the exclusion of everything else (because it doesn’t have much else to go on) is that when you kill them off (see: Herschel, Dale, Andrea, T-Dog, Shane, Laurie, etc.) you invariably piss off your core audience.  This is exactly why the meme “IF DARYL DIES, WE WILL RIOT” exists to begin with. The only thing that people care about on this show is the characters. You’ll never see a meme that says “IF THEY DON’T FIND A CURE, WE WILL RIOT” or any reference to anything else regarding the plot because there is no plot that the audience can discern or relate to.

THIS: Not happening… ever.

That said, the death of a main character can be overcome if the death of the character turns out to be for some greater good and the audience can justify and rationalize the loss of the character.  The problem with The Walking Dead in this regard is that all of these character deaths are simply pointless and they’ve made astute viewers like myself examine the series for what it is and what it’s missing.

Q: Why did Herschel have to die?

A: Because the writers are running out of ideas and needed to emotionally jar the audience by having the ruthless villain murder him in the most gory way imaginable in order to ensure that audience would return on February 9th for the midseason premiere.

Well, that was just fun for everyone… and right before Christmas, no less.

That was a mistake, folks, because Sunday’s episode accomplished two things: being depressing and boring the shit out of me.  It also made me be honest about the series in general, addressing what I rationally knew but didn’t want to accept during the midseason finale. After succeed in polarizing me very badly and I’m not the only one.

The truth is that even on the most dark and morbid series the audience needs some comic relief and ultimately some hope.  The Walking Dead provides neither.  As dark as Breaking Bad was, Vince Gilligan smartly inserted humor into it regularly and there was always an implied endgame to the series and there was always the hope that even if Walt were to go down that there would be some good fortune for his family.

There is simply no hope on The Walking Dead and there doesn’t appear to be any intention of providing any whatsoever.

9 comments on “TV Blasphemy: Sorry, But ‘The Walking Dead’ Sucks…”