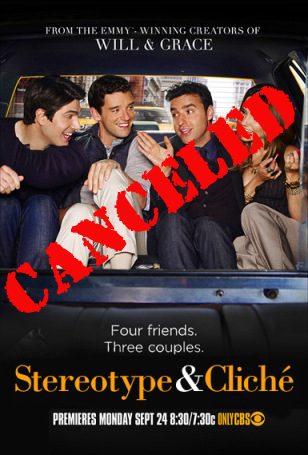 In what we can only say amounts to news that we’re surprised took this long to happen, CBS canceled their freshman “comedy” Partners on November 13th.  Yes, we know we’re late on this, as well, but we never miss an opportunity to gloat as this year’s winner for the worst new series has FINALLY been canceled and we can say, “We told you so.”

FOX has also thankfully canceled (the dreadful) The Mob Doctor, and The CW has canceled the low-rated Emily Owens.

In sadder, but, again, not unexpected news, Last Resort and 666 Park Avenue have been canceled by ABC.  Both were very good shows that didn’t take off from the start, unfortunately. But, then again, this is the U.S. television market so why should quality of programming having anything to do with success, right?