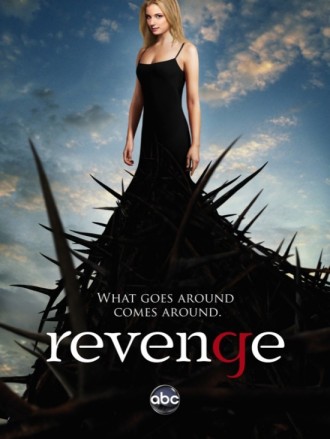 Going to have to give a bit of a preamble explanation on this one because the press release is written from the standpoint of being intentionally non-specific using a bunch of marketing fancy talk.  What it comes down to is that there will be no commercials in the November 11th episode of Revenge, instead the episode will be loaded what will more than likely be over-the-top product placement from Niemann-Marcus and Target.

Does this mean that we are going to see Victoria Grayson (Madeline Stowe) pushing around a red plastic shopping cart in a big-box store?  Doubtful (but that would be rich, wouldn’t it?), however it is an interesting experiment in non-traditional primary revenue generation to say the least, so we’re all in favor of that because we’re all in favor on of non-traditional primary television revenue generation as it opens up more opportunities for better quality programming.  That being said, we are a tad bit skeptical because we’ve seen product placement used obnoxiously in several dramas over the years that still had 18 minutes of an hour dedicated to commercials.  So, we’ll have to see how this goes.

October 17, 2012 – Target and Neiman Marcus have partnered with ABC for a ground-breaking integration in conjunction with the critically acclaimed series “Revenge.” As part of the highly anticipated reveal of the retailers’ holiday collection, Target and Neiman Marcus will be the exclusive show sponsor in the episode airing SUNDAY, NOVEMBER 11 (9:00-10:01 p.m., ET) on the ABC Television Network. In lieu of commercials, the retailers are working directly with the creative team of “Revenge” — a series known for its flair for fashion and high style — to create original content incorporating the Target+ Neiman Marcus holiday collection.

“This is an unprecedented event on every level,” said Marla Provencio, chief marketing officer, executive vice president, ABC Entertainment Group. “It has been a great experience collaborating with these two iconic brands, and we are thrilled that they chose ABC’s ‘Revenge’ as the exclusive partner.”

“The scale of our partnership with Neiman Marcus propelled us to go well beyond the traditional approach and develop marketing initiatives that reflect the historic nature of this collaboration,” said Jeff Jones, chief marketing officer and executive vice president, Target. “Working with the team at ABC has been invigorating. We’re confident the November 11 episode of ‘Revenge’ will blow our guests away and, much like our collection with Neiman Marcus, provide an unforgettable element of surprise this holiday season.”

More information about the Target + Neiman Marcus Holiday Collection integration on the November 11 episode of “Revenge” will be available via ABullseyeView.com and NMDaily.com.

2 comments on “ABC: ‘Revenge’ To Go Commercial-Free On November 11th”