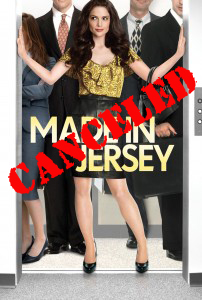 If you hadn’t already heard, CBS’s freshman series Made in Jersey has been unceremoniously canceled after airing only two episodes.  The ratings were so poor on this show that CBS didn’t even bother to burn the remaining episodes of their initial order off, choosing instead to replace the series on Friday nights with NCIS and Hawaii Five-O reruns for three weeks and a return of Undercover Boss (a series ideally suited for CBS in the 8:00 p.m. timeslot on Friday) on November 2nd.  See the revised schedule, here.

I’m not particularly surprised by this move because as noted in my preview,

“This looks so horrible we don’t want to waste any effort commenting on it further because it’s not worth our time. It’ll be lucky to get a two-paragraph review when it premieres.”

… and that was based exclusively on the trailer.  The upside is that it was gone so quickly, I didn’t have to do a review of it which is really good because I’ve had to review far more absolutely horrible shows this year than I ever thought possible.

October 11, 2012 – The fourth season of the Emmy Award-winning reality series UNDERCOVER BOSS will premiere Friday, Nov. 2 (8:00-9:00 PM, ET/PT) as Mitchell B. Modell, CEO of Modell’s Sporting Goods, ventures to the frontlines of his popular sporting goods and athletic apparel store for an unfiltered look into the inner workings of his corporation.

Companies whose bosses have signed up for undercover missions this season include:

The air schedule for the new season of UNDERCOVER BOSS is as follows:

Additional companies and airdates will be announced at a later date.

With the return of UNDERCOVER BOSS on Nov. 2, CSI: NY will move to the 9:00-10:00 PM, ET/PT time period beginning this Friday, Oct. 12. MADE IN JERSEY has been pulled from the schedule.

UNDERCOVER BOSS earned an Emmy Award for Outstanding Reality Program in 2012.  Each week, the series follows a different executive as they leave the comfort of their corner office for an undercover mission to examine the inner workings of their companies.  While working alongside their employees, they see the effects their decisions have on others, where the problems lie within their organizations and get an up-close look at both the good and the bad while discovering and rewarding the unsung heroes who make their companies run.

Photos are available on www.cbspressexpress.com