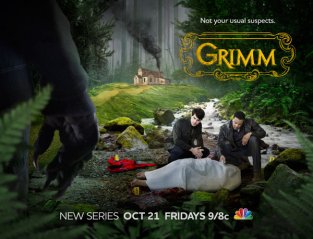 “Grimm” is a drama series inspired by the classic Grimm Brothers’ Fairy Tales. After Portland Homicide Detective Nick Burkhardt (David Giuntoli, “Turn the Beat Around”) discovers he’s descended from an elite line of criminal profilers known as “Grimms,” he increasingly finds his responsibilities as a detective at odds with his new responsibilities as a “Grimm.”

His attempts to shield his fiancée, Juliette Silverton (Bitsie Tulloch, “The Artist”), and his partner, Hank Griffin (Russell Hornsby, “Lincoln Heights”), from the hazards of his new life have reached a crisis, leaving Juliette in a mysterious coma and Hank on the verge of a mental breakdown.

With help from his confidants, Monroe (Silas Weir Mitchell) and Rosalee (Bree Turner, “The Ugly Truth”) – both reformed Grimm creatures, Nick must help those closest to him while still facing off against all manner of ancient evils, including royal lines dating back to the original profilers themselves, the Grimm Brothers. As Nick develops his ability to harness his inner Grimm, he begins to question what he once knew, never more so than when he is reunited with his mother (guest star Mary Elizabeth Mastrantonio, “Scarface”), also a Grimm, whom he thought dead for the past 20 years. Reggie Lee (“The Dark Knight Rises”) and Sasha Roiz (“Caprica”) also star as Sgt. Wu and Captain Renard, respectively. – NBC

I just finished Grimm season one and have just moved on to season two as I write this quick review. Grimm plain and simple has a lot of potential. It is, what I like to call, a “diamond in the rough” type of show. It is earnest, slick and full of wit and suspense. I have to give credit to writers David Greenwalt and Jim Kouf (Rush Hour, National Treasure) for giving me enough at each show’s end to want to come back and immerse myself in the engaging mythology of  Grimm‘s universe. It revels in weirdness and it serves up no small feat each week in trying to keep us interested in the otherworldly adventures of Nick Burkhardt. Nick is a Grimm, one of those fortunate humans that descended from the  Brothers Grimm, and you know all those fairy tales his ancestors wrote… yeah, well it turns out they weren’t fairy tales after all, and our hero has inherited the family gift of being able to see what normal folks cannot; all sorts of funky, ugly and nasty creatures that to the rest of us look like normal people… and they’re all inhabiting his universe, specifically, Portland, Oregon.

I’m reminded of Smalllville and The X-Files where with its “monster-of-the-week” formula. Much like every mutant in Smallville was a kryptonite-enhanced super being, in Grimm‘s case, every beastie comes forward from being either very dangerous and committing murder or living on the edge of society. These monsters that Nick sees are not some Disney animated, little bunnies feeding on sunflowers. These monsters are killers. They are rogues and dealers in bad medicine, creatures hell-bent on slavery, ancient forms of battle and getting high on mythological herbs and drugs.

The show sports a great and likeable cast. In the pilot Kate Burton (Big Trouble in Little China) plays Nick’s Aunt who tracks him down and gives him a trailer full of Grimm monster hunting paraphernalia. She is really fun to watch and as she finds out her time has come her portrayal takes an abrupt turn and she capably emotes. The smooth and slick Russell Hornsby (Meet the Parents, Stuck) plays Nick’s partner on the force, Hank. They have a very likable and solid chemistry. Hornsby is by the book but also likes to watch Nick closely just to see what makes him tick. They play well off each other. Hank, unfortunately is the friend that is left in the dark at the end of every episode, which is an aspect of the series I really do like, as it’s part of its charm. We like watching Hank be totally clueless as to what Nick really is. Now, my favorite is Morgan, played by Silas Wier Mitchell (My Name is Earl).  He is hands down the best thing about the make up of this show.

Monroe is a werewolf or rather a “blutbad.” He quickly becomes (not so easily, though) Nick’s go-to guy to help him with other creatures he sees and must bring to justice like hexenbeasts, fuchbaus’s, damonfeuers (dragons) and my favorite,  “The Reapers.” Mitchell is spot-on as Monroe. He is the reluctant assistant to Nick most of the time. He has to help Nick at odd times of the day and usually it leaves Monroe, in some way or another, rather put-out. Mitchell seems to be having a blast in the role. He’s tongue in cheek, funny, bufoonish and when needs to be he goes all out Blutbad and kicks some ass.

There is a mythology to the series that is spellbinding and very suspenseful involving royal houses, reapers and creatures lurking and posing as public officials like Sasha Roiz (Caprica) as Captain Renard who is stalwart in the role as a duplicitous creature of lore. I find that the show is easy to digest. It is harmless creature feature fun. The pace is good, the camerawork is flawless. Cort Fey shoots naturally and very gothically as well and it helps the show maintain its authenticity. Richard Marvin’s score is chilling and quite suspenseful. The opening strings in the intro are creepy as hell.

The show just continued to gain momentum and get better and better with each episode. I found the action to be well staged and exciting. Nick vs. the Reapers being a standout. Monroe is always fun to watch and I must give some love to Reggie Lee who steals EVERY scene he’s in as Sgt. Wu. He even gets caught up in a case or two eventually succumbing to a witch’s spell. Bitsie Tulloch as Juliette is a stunning beauty who towards the end of the season gets in over her head during a personal vendetta against Nick. She is very regal and caring. She acts with her eyes. She also, more importantly, is observant and very curious. The cliffhanger of season one has Juliette in a sleeping beauty type of slumber.

My only gripe, you ask? The CGI needs to step up a bit. It’s clunky more often than not. The transformation scenes are quick and brief but we still can see how hokey looking the beasts can be. Other times, like the Reaper battle, we get good solid CGI. I’m nit-picking thought. Check out Grimm Season One as soon as you can or pick up the DVD or Blu-ray. I think you’ll enjoy this foray into an entertaining and mythical universe. I know I do.