EDITORIAL NOTE: To understand how we do our reviews, please refer to our review of Revolution, here. 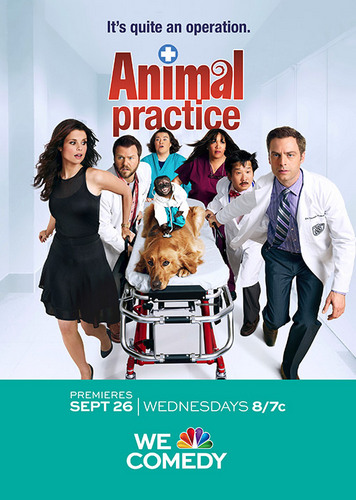 Meet Dr. George Coleman (Justin Kirk, “Weeds”), a top-dog New York veterinarian. With an unorthodox style of operating, George’s success comes from his undeniable gift with animals of all kinds. That is, all but the human kind. Dorothy Crane (Joanna Garcia Swisher) once held the key to George’s heart, but today she also holds the key to the family business as she takes over Crane Animal Hospital.  Not only is she George’s new boss, but her romantic history with him and her lack of experience with animals is seriously cramping his style.  Dorothy is whip-smart and ambitious, and she’s going to make George pay for the past.  Needless to say, he’s determined not to make any changes in his (animal) kingdom — which includes poker games with a resident capuchin monkey.  Also starring are Tyler Labine (“Reaper,” “Sons of Tucson”) as Dr. Doug Jackson, a vet who’s great with animals but hapless in matters of the heart, Bobby Lee (“Harold & Kumar”) as Dr. Yamamoto, and newcomer Betsy Sodaro as Angela.  “Animal Practice” is a production of Universal Television and American Work Inc.  The executive producers are Scot Armstrong (“The Hangover Part II,” “Old School”) and Ravi Nandan (“Best Friends Forever”) of American Work Inc. (“Best Friends Forever”) along with Emmy Award winners Joe & Anthony Russo (“Community,” “Arrested Development”).  “Animal Practice” was written by Brian Gatewood and Alessandro Tanaka (“The Sitter”), who also serve as executive producers.  Gail Lerner (“Happy Endings”) also is an executive producer.  Directed by the Emmy-winning Russo brothers, “Animal Practice” is a comedy where the animals are running the asylum. – NBC

Initial Impressions (May 20, 2012):  OK… we really hate to admit this, but this show looks insanely funny.  It’s certainly a new take on the standard comedy.  It’s ridiculously irreverant and sarcastic and it seems quite brilliant.  Without even looking at the show description, it was pretty obvious that there was involvement from the folks at Community because it definitely has that kind of vibe to it. Honestly, the funniest moment in any television trailer ever is in this clip at the end with the turtle races.  Not going to spoil it, but you’ll know why when you see it.

Shawn: *Sigh* And here we have the first review we have to do where the episode did not live up to the expectations of the trailer.  As you can tell, we really were expecting a lot out of Animal Practice, but unfortunately, it’s not nearly as good as it looks. Don’t get me wrong, it’s  not horrible, and in fact it’s actually pretty good but there is certainly nothing to make it stand out from any other comedy.  That’s a huge problem on two fronts. 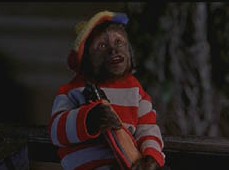 First, we hate comedies to begin with around here so a comedy has to really blow our socks off in order to get high praise from us.  Second, this show has the best, can’t-lose gimmick of all time on it that should make it incredible: animals… and specifically a well-trained monkey that acts like a human.  It’s the Doctor Dolittle effect.  Those films suck, but the animals are so flippin’ hilarious that you are fooled into thinking they’re good.  Mind you, those are talking animals, but you don’t need a monkey to talk to be hilarious.  Just dress it up in a clown suit or in a beret and have it be an alcoholic… or make it an on-staff veterinary doctor… like in Animal Practice.

The problem is that the monkey isn’t making enough appearances… yes, you read that right, I’m complaining about the lack of the gimmick monkey.  I don’t have much of a choice because, overall, the show isn’t that great.  Sure, it’s got some really good gags, but George (Justin Kirk) doesn’t have nearly the funny Scrubs–type likability and sarcasm I was hoping for and that’s not a good sign for your lead… even in a dopey comedy.  Making matters worse, there is ZERO chemistry between George and Dorothy (Joanna Garcia Swisher) and they were supposed to be an item and it’s obvious that the writers are going to rehash that romance.

The truth is that Animal Practice is more straight-up sitcom than it is wacky spoof and that’s not how it was billed.  A lot of the characters are very cookie-cutter, however, the few that aren’t kind of save the show such as Dr. Yamamoto (Bobby Lee) and Dr. Doug Jackson (Tyler Labine) who are both pretty brilliant.  So does Dr. Rizzo (the monkey), when he actually makes an appearance.

So, while I still recommend the show, the pilot wasn’t nearly as good as it really should have been and I’m a bit disappointed.  Let’s hope it picks up in subsequent episodes.

As a bit of an aside, I had to change the settings in the comments section about five minutes into posting this trailer on YouTube to make it so that all comments had to go through me before they were posted and I had to disable the voting.  Why?  Welllllllllll, because butt-hurt Community fans, redirected from a Reddit Community fan page, were flooding the comments section with negative comments and ratings because they think Animal Practice is why Community got moved to Friday nights with only a 13 episode order.  Chances are those same crybabies who don’t get that the decision on Community was made the moment Comedy Central picked it up for syndication in 2013 to get it to 100 episodes will probably flood this review, as well.  So, crybaby Community fans, we love your show, too, but seriously… get the holy f*ck over yourselves.  It’s an NBC sitcom, not Downton Abbey… and we’ll be filtering your comments, here, as well.

Watch the pilot of Animal Practice, right now, ahead of the September 26th premiere, here.  Please note, this is the only chance other than Video OnDemand services through cable providers you will be able to see the pilot.  NBC will be airing the second episode on premiere night, not the pilot.

…and that’s generous.  On any other network, we would probably say not likely because it’s difficult for us to see audiences getting very excited out-of-the-gate for this, however, this is the network that renewed Whitney, so it’s a toss-up, and yes, you are correct we use the Whitney benchmark a lot when it comes to NBC.