Really late on the draw on this one, but better late than never.  CBS’s new show schedule looks awful in comparison to the other networks.  It’s a good thing they already have a decent lineup. We’re only doing the fall schedule this time around because CBS has three new shows coming out midseason and only one of them has a trailer available and it’s not even official.

Elementary — ELEMENTARY stars Jonny Lee Miller as detective Sherlock Holmes and Lucy Liu as Dr. Joan Watson in a modern-day drama about a crime-solving duo that cracks the NYPD’s most impossible cases. Following his fall from grace in London and a stint in rehab, eccentric Sherlock escapes to Manhattan where his wealthy father forces him to live with his worst nightmare – a sober companion, Dr. Watson.  A successful surgeon until she lost a patient and her license three years ago, Watson views her current job as another opportunity to help people, as well as paying a penance.  However, the restless Sherlock is nothing like her previous clients.  He informs her that none of her expertise as an addiction specialist applies to him and he’s devised his own post-rehab regimen – resuming his work as a police consultant in New York City. Watson has no choice but to accompany her irascible new charge on his jobs.  But Sherlock finds her medical background helpful, and Watson realizes she has a knack for playing investigator. Sherlock’s police contact, Capt. Tobias “Toby” Gregson (Aidan Quinn), knows from previous experience working with Scotland Yard that Sherlock is brilliant at closing cases, and welcomes him as part of the team.  With the mischievous Sherlock Holmes now running free in New York solving crimes, it’s simple deduction that he’s going to need someone to keep him grounded, and it’s elementary that it’s a job for Watson.  Rob Doherty, Sarah Timberman, Carl Beverly and Michael Cuesta, who directed the pilot, are executive producers for CBS Television Studios. – CBS

Our Take:  When we first heard about Elementary, we wanted to repeatedly punch ourselves in the face because we are kind of tired of seeing the U.S. television industry lazily copy the success of magnificent BBC programming by stealing their shows and then thoroughly screwing up what has made the BBC versions so great to begin with. To make matters worse, someone thought it was a great idea to send Holmes to New York and making matters even worse, casting Lucy Liu in the Watson role.  So, unlike the BBC’s Sherlock, which we’ll go as far to say may be the best show on television regardless of what side of the Atlantic you’re on, this adaptation of Doyle’s masterpiece not only has set the characters and the story in the modern era, but they’ve also gone so far as to change the locale to a completely different continent, ergo, destroying part of what makes Sherlock Holmes Sherlock Holmes, and they’ve changed Doctor Watson from a male, British Army Doctor to a female Asian-American surgeon.  Fantastic.  Despite that, after watching the trailer, it really doesn’t look bad.  Don’t get us wrong, it’s no Sherlock, but it doesn’t look awful.  That being said, don’t fool yourself, the lame suits at CBS have brought us, yet again, another police procedural with a gimmick (see: Numb3ers, Unforgettable, CSI and The Mentalist for recent examples of CBS doing this).

Chance of Renewal:  It’s a police procedural on CBS with a well-known title character debuting in the fall.  Elementary will more than likely be picked up for a second season unless it’s just completely unwatchable, but you never know… with Lucy Liu in the main cast, it may be.

Vegas – Dennis Quaid and Michael Chiklis star in VEGAS, a drama inspired by the true story of former Las Vegas Sheriff Ralph Lamb, a fourth-generation rancher tasked with bringing order to Las Vegas in the 1960s, a gambling and entertainment mecca emerging from the tumbleweeds.  Ralph Lamb (Quaid) wants to be left in peace to run his ranch, but Las Vegas is now swelling with outsiders and corruption which are intruding on his simple life.  Recalling Lamb’s command as a military police officer during World War II, the Mayor appeals to his sense of duty to look into a murder of a casino worker – and so begins Lamb’s clash with Vincent Savino (Chiklis), a ruthless Chicago gangster who plans to make Vegas his own.  Assisting Lamb in keeping law and order are his two deputies: his diplomatic, even-keeled brother Jack (Jason O’Mara) and his charming but impulsive son, Dixon (Taylor Handley).  Ambitious Assistant District Attorney Katherine O’Connell (Carrie-Anne Moss), who grew up on the ranch next to the Lambs, also lends a hand in preserving justice.  In Vegas, two powerful men – Lamb and Savino – are engaged in a fierce battle for control of the budding oasis, and for both of them, folding is not an option.  Nicholas Pileggi, Greg Walker, Cathy Konrad, Arthur Sarkissian and James Mangold, who also directed the pilot, are the executive producers for CBS Television Studios. – CBS

Our Take:  This actually appears to be really good but we have two big problems with it. First, the trailer seems to have just a whole bunch of random action scenes thrown  together to make the show seem more exciting than it really is.  Second, the show is filmed in Las Vegas, New Mexico, NOT Las Vegas, Nevada and the landscape isn’t even close to matching the majestic mountains of Southern Nevada (yeah, we’re biased on this issue).  For crap’s sake, at least use some CGI and fake it.

Chance of Renewal:  Tough to call at all because the information in the trailer is so limited that we we aren’t even speculating on this one until we actually see it and review it.  In theory it looks good and we like the premise but it could all be smoke and mirrors.  Then again, the cast is magnificent and A-listers like that usually don’t sign up for a crap show. 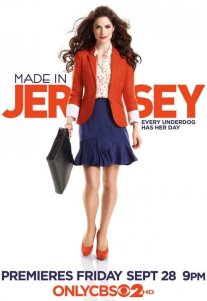 Made in Jersey – MADE IN JERSEY is a drama about a young working-class woman who uses her street smarts to compete among her pedigreed Manhattan colleagues at a prestigious New York law firm.  Martina Garretti (Janet Montgomery) finds her firm’s cutthroat landscape challenging, but what she lacks in an Ivy League education she more than makes up for with tenacity and blue-collar insight. After just a few weeks, firm founder Donovan Stark (Kyle MacLachlan), takes note of Martina’s ingenuity and resourcefulness, as does her sassy secretary Cyndi Vega (Toni Trucks).  With the support of her big Italian family, including her sexy older sister Bonnie (Erin Cummings), Martina is able to stay true to her roots as a bold, passionate lawyer on the rise in a new intimidating environment.  Jamie Tarses, Kevin Falls, Julia Franz and Mark Waters, who also directed the pilot, are the executive producers for Sony Pictures Television in association with CBS Television Studios.  Pilot was written by creator and co-executive producer Dana Calvo. – CBS

Our Take:  This looks so horrible we don’t want to waste any effort commenting on it further because it’s not worth our time. It’ll be lucky to get a two-paragraph review when it premieres.  Watch the trailer and understand why. Next!

Chance of Renewal:  ZERO.  Made in Jersey will be canceled by Thanksgiving.

Partners – PARTNERS is a comedy based on the lives of creators David Kohan and Max Mutchnick, about two life-long best friends and business partners whose “bromance” is tested when one of them is engaged to be married.  Joe (David Krumholtz) is an accomplished architect who leads with his head and not his heart, especially in his love life.  That’s in stark contrast to his gay co-worker, Louis (Michael Urie), who is spontaneous, emotional and prone to exaggeration.  Both have found joy in their love lives: Joe is newly engaged to Ali (Sophia Bush), a beautiful and sophisticated jewelry designer, while Louis is dating Wyatt (Brandon Routh), a vegan nurse who Louis insists is just a promotion away from becoming a doctor.  As news of Joe’s engagement settles, time will tell if their business and personal bond can adapt to the addition of two other important relationships.  Emmy Award winners David Kohan and Max Mutchnick are executive producers for Warner Bros. Television.  Emmy Award winner James Burrows directed the pilot. – CBS

Our Take:  Partners looks absolutely awful on every level conceivable.  Not only is it filled with the most ridiculously stupid gay stereotypes and corny and predictable jokes, it is also a typically awful CBS comedy.

Chance of Renewal:  50/50 and only because CBS audiences are incredibly stupid when it comes to their comedies.  Don’t believe us?  Consider the fact the Two and a Half Men, The Big Bang Theory, Mike & Molly and How I Met Your Mother are still running strong and $#*! My Dad Says and ¡Rob! were almost renewed.  On any other network, this would be gone quickly but you can never tell with CBS.