We also would like to note that BBC in the description, BBC America describes this new season as “[f]ourteen big, blockbuster-movie episodes…”  Waitminute, there.

As the tenth Doctor would say: 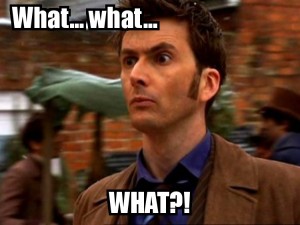 We don ‘t know about you we’re reading that as each episode is going to be at least 90 minutes long, like the incredibly popular Sherlock.  No complaints from us because that’s exactly how this show should be done.  They’ve always had the top-notch effects and the epic story-telling but they’ve been confined to multiple episode story arcs for the most part.  This might just be BBC America exaggerating (and abusing the English language) but we really want to believe.  Here’s the latest trailer and at the bottom we’ve posted the first teaser trailer that came out last year because it was just so cool.

The new season will see the last days of the Ponds, with Karen Gillan and Arthur Darvill making their final rollercoaster voyage with The Doctor (Matt Smith). Amy (Karen Gillan) and Rory (Arthur Darvill) have been at the Doctor’s side for more than two seasons but what will he do after their heartbreaking departure?

New guest stars so far confirmed to star will include David Bradley, Rupert Graves and Mark Williams. Season 7 will then see a dramatic turn of events when The Doctor meets a new friend – the recently-announced new companion, played by Jenna-Louse Coleman. Prepare yourselves for thrills, adventures and dramatic surprises as the show builds towards its enormous, climactic 50th anniversary year.

Fourteen big, blockbuster-movie episodes – each a brand new epic adventure featuring new monsters and some familiar foes as you’ve never seen them before.