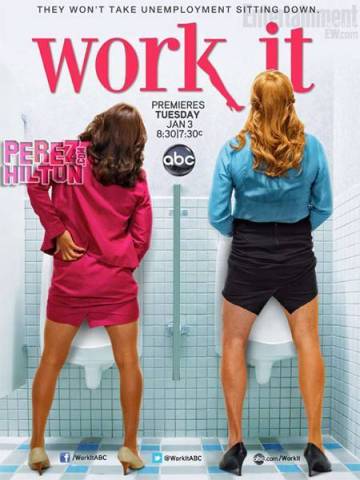 Lee Standish is a quick-witted and likable family man. His best friend, Angel Ortiz, is a hotheaded ladies’ man with no filter. The two of them worked at Pontiac — Lee as a top salesman and Angel as head mechanic — until the company went out of business. Out of work for a year, their job prospects don’t look too bright. They’ve learned the hard way that the current recession is more of a “man-cession” and their skills aren’t in high demand. Then the almost-broke Lee finds out that Coreco Pharmaceuticals is looking to hire sales reps — female sales reps. He takes a chance and goes into the interview dressed in heels, a skirt and make-up. The transformed Lee gets hired — as a woman.

Lee wants to stay true to his agreement with Angel that, if one of them is working, then the other will be too, so he tells Angel what he has to do if he wants a job at Coreco. Angel, who is miserable working at a fast-food dump, is desperate to make a change; he decides to swallow his pride and go for it. Unfortunately he tanks his interview, but when he fixes the boss’s car, he too is hired – also as a woman.

To stay employed, Lee and Angel must put aside their alpha male selves and learn to navigate their all-female workplace. Their presence at Coreco with their new female coworkers initially raises a few eyebrows, but the company’s two newest sales reps find ways to put almost everyone at ease: Enthusiastic and sometimes naïve Kristin is excited when the female Lee tells her that she, too, is a single mom. Kelly, the office party girl, is thrilled to have two more friends to hit the town with. Only Grace, the somewhat icy regional sales leader, keeps a suspicious eye on Lee and Angel, convinced that there’s something seriously wrong with them. To complicate matters, when Angel meets their new boss, Vanessa, he is immediately smitten with her. But there are some serious obstacles in the way of their romance: She’s his boss, and — no small detail — she thinks he’s a woman.

For his part, Lee can’t disclose his feminine secret to his wife, Connie, or to their 14-year-old daughter, Kat, so he tells them he got a job at a drug company – as himself. Connie notices that, since Lee has begun working at Coreco, he seems to be more understanding and sensitive to her needs. The opposite is true of Connie’s unemployed brother, Brian, who is also Lee and Angel’s drinking buddy. Sensitive and understanding he is not, so they definitely can’t reveal their secret to him.

Lee and Angel quickly realize how much they have to learn to get by in their new environment. It’s not just how to walk in heels and tighten up with Spanx. For the first time, they’re really listening to the women in their lives and opening themselves up to a whole new realm of experiences. In the process, they’re learning that to be a better man may mean having to be a better woman. – ABC

You owe us, ABC, and don't think we won't collect.

We knew this was going to be a total-sh*tfest when we queued it up on the ABC GO app on the iPad while waiting in the emergency room at UMC here in Las Vegas last Friday night, but what we didn’t know is that the diagnosis a few hours later would be diverticulitis.  The irony here is that we had two total sh*tfests going on; one on the iPad and one in the lower intestines.  So, what we’re really saying is that ABC owes us the 30% of the battery life that their awful app sucks up for watching a 30 minute program that could have been far better utilized over the seven and half hours we were in the E.R.

Yes, this show is that bad, however it’s not nearly as bad as $#*! My Dad Says or Whitney, hence, why it got a 15 instead of a big fat goose egg.

Puke inducing, indeed... and we're not talking about the diverticulitis.

As we figured, the male-bashing that has been the theme for ABC for the 2011 – 2012 season is of course being nicely carried over into the new year, but a funny thing happened on the way to the toilet to throw up: the most ridiculous misogynistic stereotyping of women on television.  You have to give this show credit for that.  Unlike all of the other fare on ABC, this show is going out of its way to offend just about everyone and it appears that they want to make it clear that the show is being written from the perspective of a 13 year-old boy, throwing out the stupidest and most tired clichés regarding the fairer sex and their penchant for gossip, back-stabbing, clothing, shoes, purses and of course how they will only eat salad for lunch.  Oh, yeah, and women can’t be successful in business unless they at least suggest to men that they will screw their way to the top.

Apparently, the LGBT crowd had a fit over this show.  We don’t understand why.  The gals at N.O.W. are the ones that really should be offended by this.  It’s fair to say that this show may have single-handedly set feminism back by about 40 years. 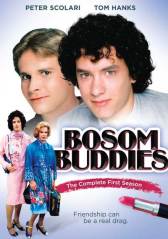 As we noted when we previewed this back in May, this show is nothing but a bad reboot of the series Bosom Buddies… which also happened to be on ABC, so you would think that someone over there must have said at one point, just based on the pitch of the concept, “You know… this didn’t work for us 30 years ago and it had Tom Hanks in it.  Maybe we might not want to greenlight this.” Still, they went ahead and ordered a pilot.  Then they saw the pilot and ordered episodes of it which leads us to ask the question: how could anyone watch that and think that it would be a good fit in any schedule?  Seriously, we’re concerned that that there may be people in scheduling at ABC that are intentionally trying to sabotage the network. 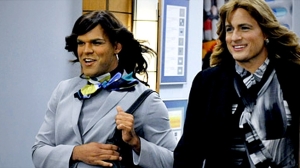 Who wouldn't think that these weren't just two ordinary women with over-active thyroids?

Furthermore, at least with Bosom Buddies, Scolari and Hanks were pretty dudes and could kinda/sorta make us suspend disbelief for a little while that they were indeed women.  We don’t think they could have picked more masculine looking leads than Benjamin Koldyke (Lee Standish) and Amaury Nolasco (Angel Ortiz), with square jaws and five-o’clock shadows that make us embarrassed over how puny ours are. 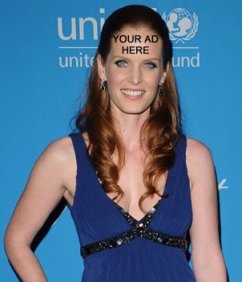 For the record, no, that is not Photoshopped. Her forehead really is that big. Give to Unicef. Thank you.

Although not as bad as $#*! My Dad Says or Whitney, Work It suffers from all the same problems that most sitcoms do being that all jokes are unfunny, clichéd and at least two decades too late.  The only thing that redeems this horrible and offensive offering is the fact that you actually feel sympathy for the cast… with the exception of Rebecca Mader (Grace Hudson) who played Charlotte on Lost (and she was annoying on that show, as well), and is just so over-the-top in her ridiculousness that you just can’t help but want to keep punching yourself in the face when she’s on-screen.

Seriously, though, as far as the rest of the cast is concerned, they do fine considering the horrible material they’ve been given to work with and you get a sense that they feel just as bad about having to make us watch this as we do about having to.  It’s like they were  given one script to look at before they were cast and then were given a completely different script after they signed-on and showed up to the first table-read and in unison, all said “What the Hell is this?”… everyone except, of course, Rebecca Mader who seems to revel in the role of Cruella De Ville: Office Bitch.  She’s seriously bringing a level of Shakespearean melodrama that puts Shatner’s James T. Kirk to shame… for this.

If you must, you can watch new episodes of Work It, here… until it’s inevitably canceled.