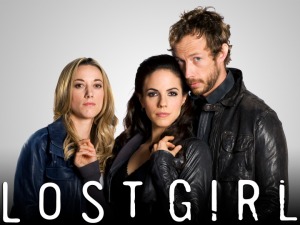 Back in June it was announced that SyFy had acquired the rights for the popular Canadian supernatural drama, Lost Girl, and would be premiering it in 2012.  Monday, SyFy announced the premiere date for the highly anticipated series.

Anna Silk (The Ghost Whisperer) stars as seductress Bo, a Succubus (a powerful female entity in folklore) who feeds off sexual energy. Raised by human parents, Bo had no reason to believe she was anything other than the girl next door – until she “drained” her first boyfriend to death.

In the premiere episode, Bo discovers she is one of the Fae, creatures of legend who pass as humans while secretly feeding off them. Faced with choosing between an allegiance to the Dark or Light Fae clans, Bo takes the middle path between the human and Fae worlds while embarking on a mission to unlock the secrets of her origin.

Lost Girl co-stars Kris Holden-Ried as Dyson, a homicide detective and Bo’s love interest; Ksenia Solo as Kenzi, Bo’s confidante; Zoie Palmer as Lauren, a doctor who competes for Bo’s heart; Rick Howland as Trick, the mysterious bartender at The Dal Riata Tavern, and K.C. Collins as Hale, Dyson’s partner on the force.

Notable guest stars include Emmanuelle Vaugier as “The Morrigan,” the leader of the Dark Fae.

This series is developed and produced by Prodigy Pictures, in association with Shaw Media and Showcase.

Syfy is a media destination for imagination-based entertainment. With year round acclaimed original series, events, blockbuster movies, classic science fiction and fantasy programming, a dynamic Web site (www.Syfy.com), and a portfolio of adjacent business (Syfy Ventures), Syfy is a passport to limitless possibilities. Originally launched in 1992 as SCI FI Channel, and currently in more than 99 million homes, Syfy is a network of NBCUniversal, one of the world’s leading media and entertainment companies. (Syfy. Imagine greater.)

Founded in 2006 by Jay Firestone, Prodigy Pictures leads the way in the production of quality film, television and cross-platform media. Its credits include the critically acclaimed feature Stuck and the television series XIII, currently airing on Showcase in Canada and Canal Plus in France. Prodigy’s hit series, Lost Girl, has recently started production on its second season. The company has several feature film and television projects in development, including William Gibson’s Neuromancer, and Weapon, in partnership with Studio 37.