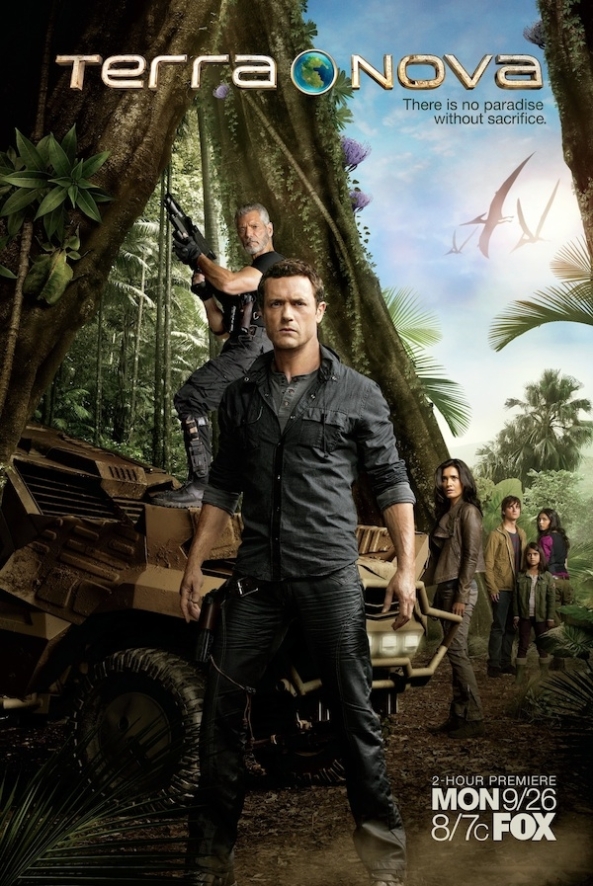 TERRA NOVA follows an ordinary family on an incredible journey back in time to prehistoric Earth as a small part of a daring experiment to save the human race. In the year 2149, the world is dying. The planet is overdeveloped and overcrowded, with the majority of plant and animal life extinct. The future of mankind is in jeopardy, and its only hope for survival is in the distant past.

When scientists unexpectedly discovered a fracture in time that made it possible to construct a portal into primeval history, the bold notion was born to resettle humanity in the past – a second chance to rebuild civilization and get it right this time.

The series centers on the Shannon family as they join the Tenth Pilgrimage of settlers to Terra Nova, the first colony established in this beautiful yet foreboding land. JIM SHANNON (Jason O’Mara), a devoted father with a checkered past, guides his family through this new world of limitless beauty, mystery and terror. Jim’s wife, ELISABETH (Shelley Conn), is a trauma surgeon and the newest addition to Terra Nova’s medical team. JOSH (Landon Liboiron) is their 17-year-old son who is torn to leave life as he knows it behind; upon arriving at the settlement, he finds himself instantly drawn to the beautiful and rule-breaking SKYE (Allison Miller). MADDY (Naomi Scott), Josh’s endearingly awkward 15-year-old sister, hopes Terra Nova will give her a chance to reinvent herself. Although Elisabeth’s medical training secured the family a spot on the pilgrimage, a secret involving their five-year-old daughter, ZOE (Alana Mansour), soon endangers their place in this utopia.

Upon the Shannons’ arrival, they are introduced to COMMANDER NATHANIEL TAYLOR (Stephen Lang), the charismatic and heroic first pioneer and leader of the settlement. Taylor warns the travelers that while Terra Nova is a place of new opportunities and fresh beginnings, all is not as idyllic as it initially appears. Along with blue skies, towering waterfalls and lush vegetation, the surrounding terrain is teeming with danger – and not just of the man-eating dinosaur variety. There is also a splinter colony of renegades led by the battle-hardened MIRA (Christine Adams), who is vehemently opposed to Taylor and his leadership.

Even more threatening than what lies outside the protective walls of the colony is the chilling possibility that something sinister is happening inside Terra Nova. The Shannons will come to suspect that not everyone on this mission has the same idea of how to best save mankind; in fact, there may be forces intent on destroying this new world before it even begins. – FOX

Regular readers of the blog know that as much as we like the concept of Terra Nova, we have been very skeptical about whether or not it would be able to find an audience on a prime-time network (especially FOX) to justify the largest budget in television history, because quite frankly, prime-time audiences don’t watch serialized science fiction for the most part.  And, yes, despite what writer/exec. producer Brannon Braga claims, Terra Nova is indeed a science fiction show.

And this brings us to what we hate about the show and what we think we may be begrudgingly loving about the show:  Producers/writers Brannon fu*king Braga and René fu*king Echeverria, the old guard who wrote and produced much of Star Trek franchise from The Next Generation forward.  For the record, many Trek fans will blame the production team of Rick Berman and Brannon Braga (“B & B”) for the demise of that franchise and while we at The ‘Tastic do not share in this opinion, we certainly recognize that Braga himself brings a certain generic, vanilla, crisis-of-the-week factor to dramatic television that certainly didn’t help that franchise or most of the other things he’s worked on since. The ‘Tastic will send a Tootsie Pop to the first person who can tell us what the plot of season eight of 24 was without going to IMDb  (and, yes, we’ll know).

This is the thing about Terra Nova: it reeks of 1990’s Trek in generic plot which is why we’re throwing Echevarria into the same boat as Braga on this one because it can’t be a coincidence.  Terra Nova, is a good show and it is superficially exciting but for true connoisseurs of drama and genre television, it’s not particularly original (the entire idea is stolen from a Star Trek: The Original Series third-season episode, All Our Yesterdays to begin with) and frankly it’s been very watered-down for a general audience. One definitely gets the feeling that the original concept was a lot more hardcore than what was actually developed for television.

That being said, the difference between Terra Nova and 1990’s Trek is that they’ve actually done a pretty good job of making the show accessible to all audiences which is what may save it in the ratings.  That’s right, for as much as the generic story-telling grates us, we’re actually glad they went this route because if they had gone balls-out with pushing the Sci-Fi aspect, it wouldn’t have a chance.  Instead, though, what they are doing is really making this a character piece, focusing on primarily the Shannons as a family and the pilgrims at Terra Nova and their adventures and less so on the mysteries surrounding Terra Nova and we see where this is going.

The producers are claiming that Terra Nova is “nothing like Lost.”  We call shenanigans on this claim and not because it’s set in a mysterious jungle, no, because it’s a fish-out-of-water character story of people from different backgrounds trying to adapt and survive in their new environment with adversarial factions and beneath it all is a mystery that is slowly coming to light.  The thing is, for all the high budget used on this show, it’s Lost-lite that’s more family friendly (also, like Lost, this show has a chance to be three seasons into it before anyone realizes that they are indeed watching a Sci-Fi show).

The show is a lot of fun even though we know exactly what we’re watching because we’ve kind of seen it all before.  They’ve done an excellent job with character development and casting and the characters if not unique are certainly likable and relatable.  The stories so far aren’t bad (the pilot was great, the second episode for us was so-so, but still fun) but they are just vanilla enough to keep the CSI and Law & Order viewer entertained with the weekly story that wraps itself up in 60 minutes.  Speaking of which, that kind of threw us off a bit, as well, because as noted, we got the impression from the publicity surrounding the show and the pilot itself that Terra Nova was going to be a serialized epic. Epic, perhaps, but serialized? Not so much, which (even though we’d prefer a serial) is a good thing for the series if it wants to have any chance at long-term survival – again – especially on FOX.

As far as the mysteries are concerned, unlike Lost, they gave away two or three answers to mysteries at the end of the pilot alone which tells us that they are trying to avoid the problems that serialized shows have and that is that if you miss an episode, you wind up… well… lost and don’t come back to the series. Yet another a very smart move.  So, in as much as we are a little annoyed by the very simplistic aspects of the plotlines, we appreciate that the producers seem quite cognizant of what they have to do to keep a Sci-Fi show from alienating a general audience.

The production values?  Well, really… is it necessary to say that all of the sets, props and visual effects are absolutely amazing when we are talking about the most expensive show in television history? Yeah, we didn’t think so, however, we will say that a lot of science for this show seems to be a little screwy, but then again, we are geeks and it’s doubtful that the average viewer is going to let that interfere with their enjoyment of the show.

So, we definitely recommend Terra Nova.  It’s a very good show, albeit, as repeatedly noted, a little vanilla, but it’s good television for the whole family.  More than that, though, we think that the show has been produced smartly enough to stave off cancellation for some time which is something that is very not only hit-and-miss for Sci-Fi in general, but something of a minor miracle for Sci-Fi on FOX.