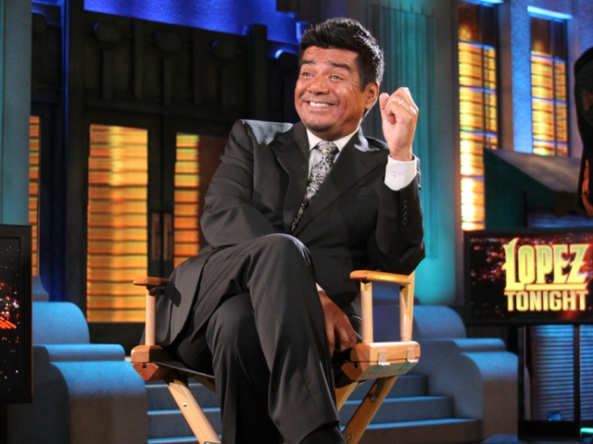 We are pleased to announce that The Hollywood Reporter is reporting that TBS will not be renewing George Lopez’s late night talk show, Lopez Tonight.

“TBS has reached the difficult decision not to order a third season of Lopez Tonight,” a spokesperson added. “We are proud to have partnered with George Lopez, who is an immensely talented comedian and entertainer. TBS has valued its partnership with George and appreciates all of his work on behalf of the network, both on and off the air.”

Really?  “…Immensely talented?”  This was a “…difficult decision?”  OK… Let’s be completely honest: George Lopez sucks donkey balls… metaphorically speaking, of course.  What the man does in his personal time, we have no insight on nor can we comment on.  But, the fact is that he hasn’t been funny in over a decade.  Don’t get us wrong, he used to be funny but ever since he got his horrible sitcom on ABC that lasted six seasons, he started just phoning it in and collecting checks and letting  the horrible writers on that show write all of his comedy… and apparently think for him as well.

Seriously, have you ever been able watch his sitcom and been able to tolerate it for more than five minutes without wanting to repeatedly punch yourself in the face.  George Lopez is one of the most unfunny crapfests ever put on prime time network television just barely more tolerable than $#*! My Dad Says.  Truthfully, there is one reason and one reason only to have ever watched that show: the hottie mom and daughter.  But, Hell, I have the Internet and there are plenty of places to go to that are dedicated exclusively to hottie Latinas (of the mother and daughter variety as well) that provide far more entertainment.

As noted, Lopez Tonight was as equally unfunny (sans the hotties) as his sitcom, and even worse, very polarizing.  His political rants are mean-spirited and he’s actively alienating any kind of mainstream audience that used to appreciate him and if any of the 500 thousand people who are fans of his don’t think this played a part in his audience numbers falling off the cliff they are delusional.  Oh, and if you’re wondering why we included a pic of two actresses who were on his show that was canceled three years ago ask yourself this: would you have preferred reading this piece having only pictures of George Lopez’ ‘I-was-fed-rock-candy-with-slingshot’ face, a donkey and a guy punching himself in the face? We didn’t think so.

So, good riddance, George.  We’re looking forward to the reruns of The X-Files or Seinfeld that will undoubtedly be taking your place… or perhaps we’ll just go to bed earlier.

2 comments on “TBS Cancels Lopez Tonight: 546,000 People Are Pissed, No One Else Cares”