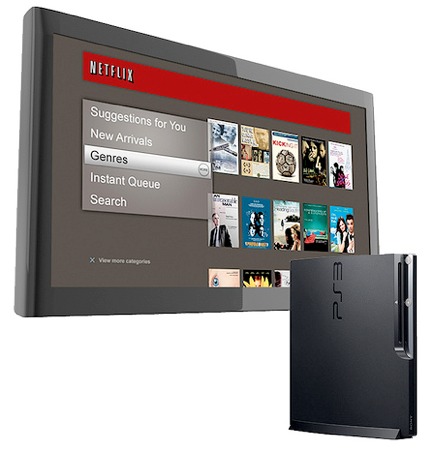 It’s official!  As of today, PlayStation 3 owners (and Nintendo Wii owners) will no longer need a disc to access Netflix streaming of television shows and movies.  This welcome development is long-overdue and highly anticipated for a service that has been beloved by PS3 owners and Netflix subscribers alike.

To make it even sweeter, the service for the PS3, which was already equal in quality to the XBox 360 service and far superior to the same service for the Nintendo Wii (the Wii offers no high-definition video service for Netflix, whereas the PS3 has offered programming in 720p since its inception) will also now be far superior to another media player device (including Microsoft’s XBox 360) by also offering programming in 1080p and Dolby Digital Plus 5.1 Surround content for a true home theater experience.  These two features are not available currently on ANY other media device at this time.

A couple of notes on this:

First, there seems to be a discrepancy between today’s Netflix blog post and the Netflix press release from October 14th.  Today’s blog seems to imply that only 1080p content will feature 5.1 Dolby Digital Plus surround sound audio whereas the press release seems indicates that the enhanced audio will be available on all content.

For right now, I’m going to assume that the press release is the more accurate source for this as the writers of the official press releases in the P.R. departments are a bit more meticulous with the details than those who handle the corporate blogs.  I will research this later personally with my own system and if my assumptions are incorrect, I will update this article accordingly.

Second, there was something buried in the press release that should be noted as very significant to home theater enthusiasts:

“Dolby Digital Plus supports up to 7.1 channels of premium-quality surround sound…”

Now, although only 5.1 is being offered currently, as noted, DD Plus does have the capability to support the more contemporary 7.1 format.  Considering that Netflix has a strong reputation of actively improving the services they offer, it would not be surprising to see 7.1 offered in the future.  It might be a while, (after all, it took a year for Netflix to develop a PS3 application to run its streaming service as opposed to using a disc), but the wait will be well worth it.

This latest development is just one more reason to consider a PS3 as your ultimate media and entertainment device.

Current PS3 owners, go to the “PlayStation Network” section of the main menu and install the Netflix application from the “What’s New” area and you’re ready to go!