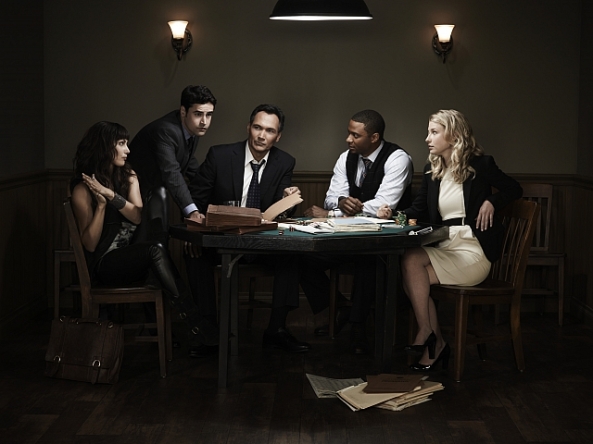 Few jobs are guaranteed for a lifetime, and a Supreme Court appointment is a position that no one ever quits – unless he is Cyrus Garza (Smits). A playboy and a gambler, Justice Garza always adhered to a strict interpretation of the law until he realized the system he believed in was flawed. Now, he’s quit the bench and returned to private practice.

Using his inside knowledge of the justice system, Garza and his team will travel across the country taking on today’s biggest and most controversial legal cases.

Before we go any further with this review let me just say that I didn’t have to even watch this mess to know how awful it would be but I did it anyway. Not because I wanted to, but because I felt that it was only fair that I exhibit some level of integrity with a review considering that the producers exhibited none when they created Outlaw.  I’ve made it clear that I’m skeptical of legal procedurals but this is downright embarrassing.

The show begins WORSE than I thought it could with a death-row inmate who obviously is set to be executed within hours talking with his wife through glass telling her to move on and to find someone else for her and the kids. Then the lawyer comes and delivers the bad news: the governor will not issue a stay of execution because, and I quote, “the governor is an idiot” which leads me to wonder if this guy was actually convicted of murder or jaywalking, considering his attorney’s brilliant legal analysis of the governor’s decision. Super Lawyer then informs both the husband and wife that he has “just filed a request with the Supreme Court to stay the execution.” He then tells us that he knows that it’s a “hail mary.”

In the next scene, we see our protagonist, Cyrus Garza, sitting at a table in Vegas, and he just gets the card he wants, cheers with all of the people standing around him and exclaims, “People say there’s no justice!” Then we see him being escorted out of the casino by security giving a lecture to these boners about how counting cards is not illegal and he then cites New Jersey State Supreme Court case law to prove his point. Beyond how stupid the whole scene was, there isn’t a lawyer on the planet that randomly cites case law for whatever everyday situation that arises… unless thery’re slobbering drunk and are attempting to intimidate the police officer.

Then, as he’s leaving the casino he gets accosted by some hottie cartoonish-lawyer from the ACLU about the case of the guy in the opening scene and she proceeds to lecture him about the law and he argues back with what the producers apparently believe a conservative would say and he then proceeds to have sex with the ACLU lawyer. After we see hottie ACLU chick laying on her sofa with her bra on the coffee table (dude… you couldn’t even take it to the bedroom?) we see Garza watching some news show about his father, Francisico, and himself which is being shown to audience for the sole purpose of plot exposition to show how the father was a liberal and champion of the little guy and how his son is “perhaps the most conservative member of the Supreme Court.” The father on the video then says that his son is wrong and that he believes that in his heart, Cyrus knows this. If you haven’t figured out the message yet it’s simple: all conservatives are horrible, evil and self-centered and all progressives are morally superior and altruistic. What’s also obvious is the blatant attempt to paint anyone who is a conservative as being a complete hypocrite and having morally reprehensible character traits (Garza is of course a degenerate gambler and a womanizer as well).

Have I painted a pretty clear picture of how stupid this show is already? Just think: that was all in the first four minutes.  It really doesn’t matter what your politics are, the ridiculous preachiness of this entire show is so over-the-top as to make the show utterly unwatchable. This is exactly why audiences stopped watching Boston Legal three seasons in despite the fact that James Spader and William Shatner and the rest of the cast gave outstanding performances (Law & Order suffered from this problem as well).

I’m sorry, but seriously, who is this approach appealing to? All this does is completely alienate conservatives and moderates in the audience and with progressives, you’re just preaching to the choir. The biggest point of all is that audiences in general are sick and tired of this crap from television and film. They want to be entertained, not lectured to about social justice… especially not on Friday at 10:00 p.m.  If they want political partisanship they’ll turn on FOX News or MSNBC during prime-time.

Beyond the preachiness, the show is completely legally inaccurate and ridiculously clichéd. Statements like, “The whole legal system is based on protecting that one innocent person that’s been falsely accused,” “You lawyers are all the same. This is just a game to you. You make me sick,” and “You can’t put the system before a man’s life,” permeate the script in place of actual dialogue and original plots.

To make matters worse the cases aren’t even compelling. They are incredibly contrived and stolen from old Law & Order episodes and you pretty much have the result of the case figured out within the first twenty minutes and of course each episode is replete with the surprise evidence and the almost Scooby Doo-like conclusion (“…and I would have gotten away with it, too if it weren’t for that meddling former Supreme Court Justice!”). There are no surprises here whatsoever.

Speaking of clichés, the ensemble cast couldn’t be more ridiculous and – again, I’ll use that word – cartoonish.  Think of it like this: one day the casts of NCIS, Shark and C.S.I. were all involved in a bizarre cloning experiment like in the 1988 Ivan Reitman film Twins, starring Danny DeVito and Arnold Schwarzenegger. They put all of their DNA together in a blender and it resulted in two casts, one that we’ll call the “Julius” cast, the other we’ll call the “Vincent” cast. Well, apparently the Vincent cast – the one that was the result of all of the leftover crap – systematically smothered the Julius cast with a pillow and burned their corpses and went to work on this show. The characters are lame and the acting is horrific.

The only reason to even consider watching this show is for Smits, who always puts in a solid performance and actually pulls off the Garza character quite convincingly but he simply cannot carry this bad show that spends far more time on the proverbial soap box then it does attempting to entertain the audience and when I say far more time, I mean it’s a 90% to 10% ratio. It’s kind of like when you get suckered into go to an Amway meeting for the promise of a free meal but with the Amway presentation you have the choice to get up and walk away after your meal.  If you watch this show, you have to wait for the entertainment portion to enter sporadically throughout the hour. NBC must be aware of how bad this show is which would explain why the put it in during the absolute worst time slot in the prime-time schedule.   I think it’s obvious that they are attempting to bury this show so it didn’t stain what is otherwise an amazing Fall prime-time lineup.

So for my closing argument:  Hollywood, keep your politics to yourself, at least with prime-time television, and just create compelling drama that ALL audiences can enjoy.