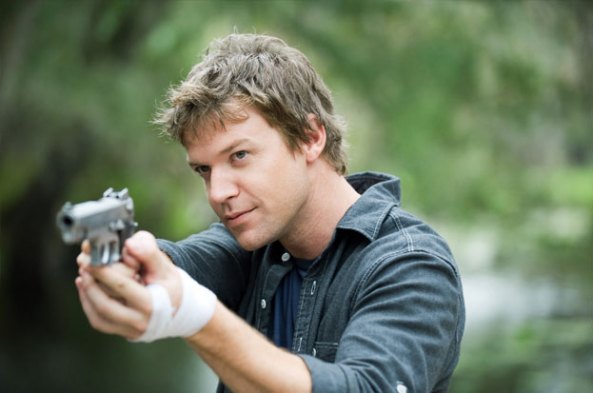 The Glades stars Australian actor Matt Passmore as Jim Longworth, an attractive, brilliant, yet hard to get along with homicide detective from Chicago who is forced into exile after being wrongfully accused of sleeping with his former captain’s wife. Longworth relocates to the sleepy, middle-of-nowhere town of Palm Glade, Florida, where the sunshine and golf are plentiful and crime is seemingly at a minimum. But this town outside the Florida Everglades isn’t quite as idyllic as he thought, as he finds people keep turning up murdered. Each case pulls Longworth off the golf course and reluctantly into his element as one of the sharpest homicide detectives in the field. (A&E)

I’ve been watching police procedural shows for years and I hate most of them that people seem to drool over.  I gave up on the entire Law & Order franchise years go, I was never a fan of NYPD Blue (although I concede that it was occasionally entertaining) and I absolutely hate the inane CSI franchise and question the intelligence of the millions of fans who think that it’s actually any good.  I could go into my hatred of CSI all day but I’m reserving that for a separate post.  Needless to say, for a police procedural to really get my attention it has to be unique and well-written, but most importantly it has to be character-driven as opposed to event-driven which is what most of the generic police fare is.  A few of the shows that really stand out in this genre and meet those standards over the last decade for me are The Wire (HBO), the short-lived but brilliant Boomtown (NBC), The Shield (FX) and most recently, one of my favorite new shows, Justified (FX, review forthcoming).  Well, add The Glades to that list.

Like its predecessors, The Glades weaves excellent storytelling around and a well-written group of complex supporting characters with a central character that not only brings it all together but stands out as the reason to come back week-to-week.

Passmore is brilliantly cast as Longworth, which is really no small feat because the truth is that the character could easily come off as the clichéd cocky, big fish/small pond, I’m-smarter-than-all-of-these-small-town-hicks cop who every week learns a little lesson from living in small town America that gives him a greater appreciation for his colleagues. We, of course, have seen this more than once in TV and film and of course we’re bored by it.  Instead, though, Longworth, cocky as he is, is cocky for a reason: he’s a really good cop, knows it, but isn’t arrogant about it.  It’s just kind of a matter-of-fact deal with him but he respects his fellow colleagues who are competent and though he’s tolerant of his unmotivated colleagues like his partner, he recognizes their weaknesses and just goes about his business to make sure that they don’t impede his work.  The point is that unlike other clichéd cops on TV, Longworth isn’t all up in anybody’s face about how good he is and how bad anyone else is, he just does the job and does it well.  The character is witty and sarcastic and as a viewer you appreciate his ability to think outside of the box to bring clues together from unexpected sources.

Another reason why I put The Glades into the category of unique police procedurals is because it does something that most cop shows really don’t do: it makes the town of Palm Glades, Florida as important of a supporting character as anyone else in the cast, as opposed to just a backdrop for the drama.  All of the other shows I mentioned all have this in common.  The Wire with Baltimore, The Shield and Boomtown with Los Angeles and Justified with Leland, Kentucky.  I always appreciate shows that understand that the locale is an integral character to any good story.  It provides a depth to all of the live characters and their perspectives and it acts as a device to truly engage the audience, giving them a sense that they too, truly know what it’s like to be from Baltimore, L.A. or even Leland, Kentucky, even though they may have never even been there before.  This approach has been done in film for decades but it is a relatively new concept in television and almost non-existent on network television.  That being said, it’s entirely refreshing that a central character of The Glades is the Glades itself.

The pilot was excellent and the writing near flawless, albeit a bit rushed at the end because it’s obvious that they were trying to cram character development/establishment and a complex plot all into one hour (NOTE TO A&E: If a show is as good as The Glades is, a two-hour pilot will keep our attention).  The story takes us on Longworth’s journey to connect clues and if you blink, you might miss something which is of course the true sign of a good mystery.  The twist at the end is brilliant and of the quality you would expect from premium channels like HBO or Showtime (again, I just wished it wasn’t so rushed) and believe me, unlike everyone spoiling Shutter Island by telling you there’s a twist and ergo you expected it (and like me, probably figured it within the first 20 minutes), it is highly unlikely you will expect this particular twist even though you know one is coming.  I just hope that they keep the twists coming like this every week.

You can watch the entire pilot episode right here on A&E’s website if you missed it or don’t have cable (make sure to scroll down and choose Pilot as the latest episode will automatically play when you click the link) and in fact, it looks like you can catch all of the episodes online (yay!).